I mentioned a hot Target printable coupon this week, and it is a goodie.  I walked out tonight with three free packages of Nexcare Kids Bandages, only paying $.25 in tax.

The Strawberry Shortcake variety was marked down to $1.64, and Shrek was $1.68.    The Target printable is still available (you can print twice), and I also received a "Big Honkin' Deals" children's ad magazine with Target coupons that had the $1 off of Nexcare Kids as well.  I stacked them with three $1 off printables (no longer available), making them all free.  Though the $1 Nexcare manufacturer's coupon is no longer available, you can also stack with a $.55/1 from any of the 4/3 SS,  5/1 SS, and 6/5 SS inserts- which still isn't too shabby! 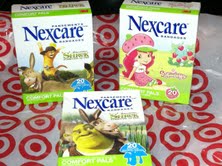 I am fairly certain I surprised the cashier, because he literally didn't say anything after running my coupons.  I finally had to break the silence by politely asking if $.25 was my total and if I could pay.  He said something to the effect that he had run lots of coupons before, but never seen anyone walk out with all of their items free.  I was sure to let him know how hard I work to plan ahead : )


Posted by ShortLittleMama at 11:15 PM